As my nine years on the Hellenic Professional Society of Texas Board comes to a close, it has been an honor and a pleasure to serve as president, corresponding secretary and counselor.  I have learned so much from our dynamic members:  Maro & Petro Yuanidis, Anna Mavromatis, Costas Caracostis, Lena Patsidou, George & Margo Kalfoglou and the list goes on and on. Our Society is one of the great treasures of Houston. Not only do we organize events that promote Greek culture to the community, but we welcome the many Greek professionals relocating to our city from the U.S and abroad.

I was recently asked to share some favorite memories from my time volunteering on the board, so these are several thoughts that come to mind.

Each year the Society features a highly anticipated poetry event organized by Alex Kalamarides, Katerina Kontogeorgaki and Dimitrios Varvarezos.  All of these productions are special in their own way, but my favorite was Palamas: A Dominant Force in Modern Greek Letters held in the Byzantine Fresco Chapel in 2009. The combination of the poetry presented with music in this remarkable setting was something I will never forget.

In 2010, the Simotas Family created a new scholarship as a tribute to their father by his four daughters. Dr. Alexandra Simotas served as our guest speaker to present the Nick Simotas Scholarship of Academic Achievement.  In my opinion this was one of the most heart-felt presentations we ever had. Alexandra spoke about the importance her father placed on education and women pursuing their educational potential. I have been actively involved with the scholarship dinner for many years, and my role to request donations was always made easy due to the generosity of donors such George & Michelle Loes, John & Joni Zavitzanos, the late Michael Economides and his wife, Christine and Nina & Peter Peropoulos. 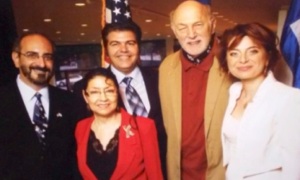 I especially enjoyed working with Alexandra Theodoropoulou (First Female Greek Consul in Houston)  during her tenure 1997-2011. Alexandra was very active in organizing events to promote Greek culture and arts.  In her final year, Alexandra coordinated the Hellenic Independence Day celebration at the Museum of Fine Arts, Houston on March 25, 2011.  This served as a great example of all the Hellenic organizations in Houston working together to plan the logistics.  The evening featured the Apollo Chamber Players, and the Olympian Dancers of Houston to make this a truly memorable event. 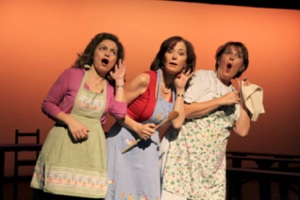 Even though I don’t speak Greek, I have many fond memories of the play H Themis Exei Kefia at Barnevelder Theater in 2011 directed by Tatiana Zakolikou. The entire Society came together to work on this project including finding sponsors, selling ads and countless hours of rehearsal . Who knew that we had such fine actors (and unabashed hams) in the HPST?

Lastly there was our 40 year celebration in 2015. We had a tremendous turn out and this was a wonderful opportunity to remember all that we’ve accomplished since 1975.

On a personal note, last year when I was being treated for cancer at MD Anderson I was really touched at the outpouring of support concern that I received from everyone. Our Society is like a family.

The Hellenic Professional Society is now in the capable hands of Sarados Milios, Katerina Kontogeorgaki, Katerina Kourentzi, Stella Korre, Karolina Ioannou, Georgios Apostakis and Lena Patsidou.  They have great ideas planned for the future. As evidenced by our recent general assembly meeting, there were many new faces and young families with children, so it is evident that the HPST will grow and thrive. I will continue to volunteer and help organize projects, and encourage all Society members to do the same. You are the life blood of our organization and will find this to be a very creative and rewarding experience.

This entry was posted in HPST Memories. Bookmark the permalink.